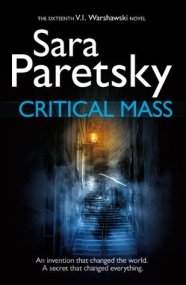 4 out of 5 stars – When choosing which Paretsky I would read for this list I selected Body Work and Critical Mass. Both sounded interesting and both had links to the innovative historical political fiction that Paretsky excels at, but Critical Mass talked about the making of both the computer and the atomic bomb and this sounded amazing.

When Warshawski investigates a concerning phone call, she becomes embroiled in a mystery surrounding the family of a Nobel prize winner, the FBI, a technical company concerned with political secrets for the united states, and with uncovering shattering secrets about nazi – us collaboration on nuclear power.

What Paretsky does very well, is find plausible and interesting ways to introduce historical and political fact to the reader without it being obtrusive and instructional. There is always enough mystery and action to allow for the explanation to be informative and educational while adding to the novel, enhancing an entertaining tale with reality sprinkles that remind the reader – while some of this action is far-fetched, the majority of the conspiracy, is, very real and very probable.

As a character V.I. Warshawski  is likeable but not soft. I find the character to be a good mixture of the feminine and the masculine rather than Paretsky trying to overcompensate with a very masculine, hard-boiled character, or making V.I too soft and dainty, always becoming the damsel in distress. I think Paretsky suitably honours and enhances the hard-boiled detective tradition through this character and that adds to the enjoyment of the novel. She consistently avoids the trap of having Warshawski need someone (a man) to rescue her, she makes her resourceful, determines and intelligent but I also admire the fact that Paretsky shows Warshawski’s softer side and juxtaposes her toughness with small scenes of touching emotional interactions between Warshawski and her friends and lover.

In Critical Mass Paretsky also narrates a tale of a female scientist, who is intelligent, but whose work is stolen. She is resilient but is consistently beaten down. Importantly, however, Martina prevails. The reader learns the story of America’s nuclear program as they utilise known Nazi offenders and sympathisers. It also talks about some of the lesser known Nazi camps where nuclear experiments were conducted. This provides a small reprieve from the main actions of the stories but serves to further engross the reader with the meta-story that compliments and expands a twisting and intriguing main storyline. Paretsky suitable links evidence and information found within the main story by Warshawski and uses these as a door into the fictional historical tale, a skill she has used within other works, which is replicated here with unparalleled success.

Paretsky’s hard-boiled brand of detective fiction is an interesting mixture of quantifiable fact and enthralling fiction. Although the stories specifically used by Paretsky are creations they are based on real evidence and thus adds another interesting dimension to the story. I love the characters created by Paretsky and I especially love her female, hard-hitting detective. Critical Mass was easy to read and enjoyable, so I would definitely recommend.

If You Liked This

Try the Temperance Brennan series by Kathy Reichs. Reichs explains the anthropology in an understandable lay manner, without patronizing and includes aspects of real events which help to form her stories, in a similar manner to that of Paretsky. Both female detectives are strong characters who are great to read, Reichs, however, does have a bad habit of turning a smart ass-kicking woman into a damsel in need of rescue at the end.