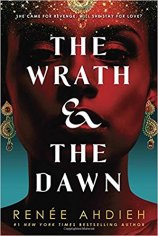 The Wrath and The Dawn

3.5  out of 5 – because this novel just fell short. Seeming to build up with fantastic potential, and the just miss the mark each time. You could argue that this would leave you wanting more? But what it left me with, is no great desire to pick the book back up again.

When a stunning young girl volunteers to be a sacrificial lamb for the Caliph of Khorasan – the enigmatic and murderous boy king, who marries and murders a new wife each day – the people in her life are concerned and intrigued. What could you be up to? But not everything is as simple as good and bad, right and wrong, and this is something which Shahrazad must learn. Because the love she feels, it’s probably wrong, but it also feels very right.

“You honestly expect me to breath in a world without air?”

“You have a beautiful laugh. Like the promise of tomorrow.”

The story of Shahrazad and the murderous caliph was known to me previously due to 1001 nights. I had been interested in reading these stories, sure that the different culture would provide a world of magical and interesting wisdom. A set of stories which I had not previously encountered, and which could transport me on some kind of adventure. So when I heard about The Wrath and The Dawn, I thought that this sounded like an amazing idea of a novel.

I wanted to understand the different culture, feel transported to the new environment, and gain a glimpse of an interesting world. I was sure, that if someone was able to create a strong, intelligent, and fearless female character, they could also show the soft side of a monster. That the monstrous elements would be emphasised, made visible, and laid bare, with explanations for these actions. I wanted to see a slow kindling of a romantic relationship that was forbidden, intoxicating, and ultimately doomed.

I think this book doesn’t quite match what I hoped because maybe I was just hoping for too much. Now, this needs to be said, and is an important disclaimer to this review – Shahrazad is a strong and fearless woman, Khalid is spoken of as a monster, but also shows his tenderness, and their relationship is doomed. There are some nice touching moments in this and some moments of magic and intrigue. It sets up the beginning of a duology well. But as a story in its own right?

I don’t think quite enough time was taken to fully develop the characters. I think it jumps in too quickly or doesn’t give you enough flashbacks, to really build the story and your care for the world. This is important, given the destruction towards the end, you need to really care for it and I just didn’t. The romance was nice, but not enthralling, the characters were good, but not captivating, the world was intriguing, but not enticing. Essentially, this novel was just not quite enough.

If you liked this…

Here, I’m going to suggest Shadow and Bone by Leigh Bardugo. It uses a Russian culture that I don’t think most readers will be familiar with, has elements of magic and a strong female lead. Oh, and it also features a sexy dark romance which made me squirm.